How many times have you heard about the Paseo de los Tristes in Granada? This corner is not only magical, but it is also one of the most popular and essential places to visit in the city.

Every day hundreds of people, locals or tourists, walk through here, and in addition to offering you a pleasant walk, this famous street that continues perennial in time, also invites you to visit some of the places of interest that are found here.

And of course, you will not lack bars, restaurants, accommodation and leisure.

Do you want to see everything you need to know about the Paseo de los Tristes in Granada and Carrera del Darro?

Why is it called “Paseo de los Tristes”?

It is really called Paseo del Padre Manjón, although because for decades the deceased were said goodbye on this street and even the cemetery, it was popularly called Paseo de los Tristes, and that is how it is known today.

It is one of the most emblematic areas of the Albaicín and probably of all of Granada. In addition to bordering the River Darro and crossing it with several historic bridges, it also offers a magnificent view of the Alhambra.

The usual walk is to start walking through Plaza Nueva and continue along Carrera del Darro, a cobbled and pedestrian street (except authorized), which can be considered by far one of the most beautiful and charming streets in Granada.

At the end of this original street is where the Paseo de los Tristes is located 😍.

Through this route, you will come across numerous bars, accommodation, shops… And many passers-by. So it offers a unique and singular environment. Nothing to do with sad!

In this way, if you want to know and see the Paseo de los Tristes in Granada, we recommend you read the following information:

To begin with, the Paseo de los Tristes is located in the Albaicín neighborhood of Granada, probably the most beautiful and most particular of the capital, also declared a UNESCO World Heritage Site. So now you can get an idea!

And, without a doubt, the Paseo de los Tristes de Granada is one of the best things to see in the Albaicín.

Its location is privileged, just below the Alhambra, bordering the River Darro and very close to the city center. For this and for many other reasons, it invites without a doubt route through Granada.

2.How to get to Paseo de los Tristes

As it is located in close to the city, to access here you have several options:

3.Things to do in Paseo de los Tristes

As we mentioned before, it is advisable to take the beautiful route Plaza Nueva – Carrera del Darro – Paseo de los Tristes. And finish where the Paseo de los Tristes fountain is located, one of the most romantic places in Granada and where you can observe the Alhambra in a privileged way.

And what will you find on your walk through the Carrera del Darro in Granada?

Starting from Plaza Nueva, these are the points of interest of the Paseo de los Tristes in Granada:

This church located in Plaza Nueva, is considered the beginning of the Carrera del Darro. It is a Site of Cultural Interest and is part of the set of Mudejar churches in the city. 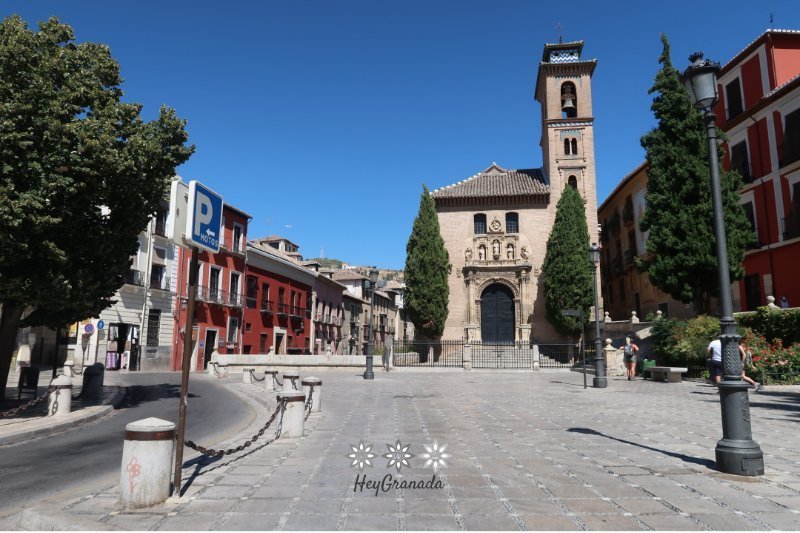 Along the entire Carrera del Río Darro there are some historical bridges worthy of including in some of your photographs, such as Puente de Cabrera, Puente de Espinosa, Puente de las Chirimías, Puente del Aljibillo or Puente del Cadi.

It is an Arab bath from the Ziri period, 11th century, declared an Asset of Cultural Interest and which in its time was known as the Nogal Bath. It is the only original Arab bath that can be visited of the three that are preserved in the Albaicín, and it is also in good condition.

It was founded in 1520 by Hernando de Zafra, secretary of the Catholic Monarchs. It has a Renaissance façade, a Mudejar-style church renovated after the fire in 1678 and several patios that come from the Moorish houses that were donated for its construction. The convent is open to the public for your visit, and you can also buy typical sweets.

This house was built on the foundations of an Arab palace, and houses the Archaeological Museum of Granada, one of the oldest in Spain (1879). The building also keeps the legend of Hernando de Zafra and his daughter Elvira, who was locked in her room, after dishonoring her father and dying of being poisoned.

Of Mudejar and Renaissance style, it stands on the remains of the old Bath Mosque and was designed by the architect Juan de Maeda. Inside, the great Mudejar armor stands out.

It is located next to the Puente de las Chirimías and was a viewpoint where the musicians performed and the personalities of the moment contemplated the celebrations of the Paseo de los Tristes. The shawm was a musical instrument that was a direct ancestor of the oboe.

Once in the same Plaza del Paseo de los Tristes you will see this solitary 20th century building on the hill.

At the time it was the Hotel Bosque de la Alhambra, but it closed shortly after due to the inconvenience of shade and humidity in this area. Since its closure, it has been the subject of numerous ghost stories and myths.

It is the one that gives the real name to the place: Paseo del Padre Manjón.

Right at the end of the Paseo de los Tristes you will find the Cuesta de los Chinos on your right. It is one of the historical entrances to the Alhambra, from the medieval Muslim city. You can walk through here until you reach the site of the monument.

Finally, as it is located in a privileged environment, from the same Calle del Paseo de los Tristes you can start a route through the Albaicín neighborhood of Granada, through the many narrow streets that go up here, or through one of the main streets , the Cuesta del Chapiz, just at the end of this walk.

4.Where to eat near Paseo de los Tristes Granada

Nothing like completing your route with a good plate of food and a good Alhambra beer.

And, where to eat and have tapas on the Paseo de los Tristes in Granada?

Sign up for the following places to eat, have tapas, have a drink or a coffee:

Staying in one of the most picturesque streets in our country, without a doubt, has a special charm.

Historic buildings, typical Andalusian patios, Andalusian decoration… Here are some of the best hotels in Granada.

Of course, keep in mind that this street and many of those that access it is pedestrian, so you should leave your vehicle in another area of ​​Granada and get here by taxi, bus or walking.

So, where to stay close Paseo de los Tristes?

Take note of the following accommodations to see which one best suits your preferences:

In addition, in the nearby streets of the Albaicín you can find many other charming accommodations for all budgets.

Visiting the Paseo de los Tristes de Granada is a must and one of the tourist interest places you shouldn’ t miss. It doesn’t matter if you already know it, because walking around here means to recharge yourself with energy.

To finish, we recommend that before visiting any place of historical interest in the Paseo de los Tristes area, check the visiting hours, as they can vary according to the season. However, the simple fact of walking through the atmosphere of this street is already an activity!

On the other hand, we also advise you to visit the Paseo de los Tristes de Granada at night, because the magic and charm are even greater ?

Do you know the Paseo de los Tristes? What do you think about it?