We will answer all these questions below and we will tell you everything you need to know before visiting this historical, cultural and religious monument of the city.

All you need to know to visit the Sacromonte Abbey

Nothing better than having the basic information before visiting a place of tourist interest, so let’s see the basics that you should know to make the most of your visit the Sacromonte Abbey in Granada.

It all begins when in 1595 the relics of San Cecilio, disciple of the Apostle Santiago, as well as the remains of his followers, San Hisicio and San Patricio, who also suffered martyrdom during the persecutions of Nero. Therefore, they would be remains of the first Christians found in the city.

Also, next to them were the lead books, lead plates written in Arabic that tell legendary stories about the apostolic and Arab origins of Christianity in Granada. Although later, the Vatican proclaimed them as false.

From this moment, the people of Granada began a massive pilgrimage movement to this place. And 1,200 crosses are located on the road to the Holy Caves (today there are only 5 left).

In the year 1,600 all these relics are recognized as authentic and that is when Monte Ilipulitano is renamed as Sacromonte.

In 1609 work began on the Abbey of Sacromonte, by decision of Don Pedro de Castro, bishop of the city. A foundation is also established for the abbey, with 1 abbot and 20 canons.

From the beginning, the abbey has promoted numerous activities of a social nature, founding one of the first university colleges in Europe, in 1610.

Unfortunately, in the history of the Abbey of Sacromonte there is an event to highlight, and that is that in the year 2000, the monument suffered a fire. Because of this, later on, a new Museum was built and the Abadía del Sacromonte Foundation was created, with the main objective of rebuilding the entire monument. For its part, the Sacromonte Abbey website is in charge of promoting it for tourism. 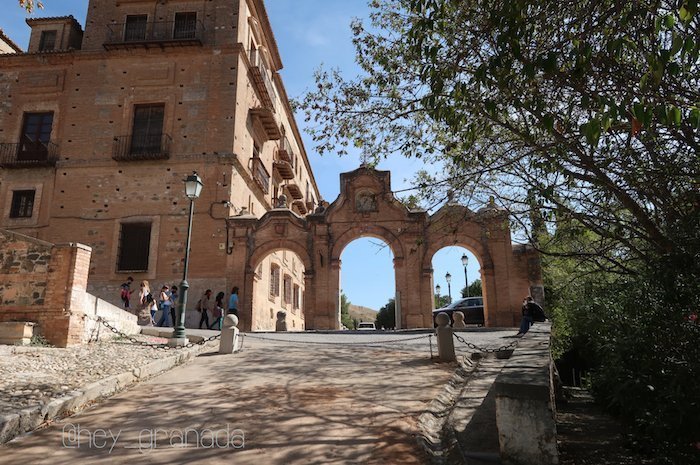 Therefore, today it has become a fantastic monumental, cultural, artistic and religious complex to visit in Granada capital and in the emblematic Sacromonte neighborhood.

In addition, in this place the popular Cristo de los Gitanos is guarded, one of the most important figures and processions of Holy Week in Granada.

On the other hand, on the occasion of these findings, in 1646 San Cecilio was proclaimed as the patron saint of the capital, his holiday being February 1. On this date every year multitudes of people come to the Abbey to celebrate the festival, eating the typical dishes of the Sacromonte, the broad beans with ham and the Sacromonte omelette.

The visit to the Sacromonte Abbey

The faithful can also go to the Sacromonte Abbey Church to celebrate masses and some events.

Likewise, the entrance esplanade can be considered one of the best viewpoints in Granada, since the monument is located at the top of the gypsy neighborhood of Saromonte, above the city, the Alhambra and the Valparaíso Valley.

But in addition, the monument is open to the public for its visit. And what does the visit to the Abbey of Sacromonte de Granada include?

General visit to the Abbey

During the general visit to the Abadía del Sacromonte de Granada, a tour of the contemporary building is made, as well as the following areas:

Where is and how to get to the Sacromonte Abbey

The monument is located in the upper part of the same Sacromonte neighborhood.

But how to get up to the Sacromonte Abbey in Granada?

Another option is to take a bike route here, simply to enjoy the nature that borders the capital and at the same time contemplate a different panorama from the usual one.

What is the Sacromonte Abbey schedule

* However, in these moments a shorter schedule has been adapted from Wednesday to Sunday and from 10:30 a.m. to 6:00 p.m. (last entry at 5:00 p.m.). Visits will be free and a gift and single-use guide will be provided. In addition, the use of a mask is mandatory.

As we mentioned before, the Holy Caves are only visited between the hours of 12h and 16h.

The duration of the visit is approximately 1 hour.

Where to buy the ticket

As currently the general visits are carried out without a guide, we suggest you buy the Sacromonte Abbey tickets that includes an English audio guide with the regular price.

Otherwise, you can buy tickets to the abbey on the same official website.

If you have the Granada Card tourist card or the Granata Cristiana voucher, you can also book from the official website, where you can see the option to select this type of ticket.

Keep in mind that in the case of groups it is necessary to make a prior reservation for the entrance to the Sacromonte Abbey.

How much is the ticket

The prices of the Abadía del Sacromonte in Granada are as follows:

* Free admission: Monday to Friday at 10:30 a.m. and with prior reservation (temporarily disabled).

It is undoubtedly a must if you want to know things to do in Granada.

It is said that the Sacromonte Abbey of Granada, together with the Alhambra and the Cathedral, make up the fundamental triangle to understand the past of the city. Have you already visited them?