When we say that the province of Granada has it all, we are not lying to you! And it is that very close to the capital, just about 60 kilometers away is the Costa Tropical of Granada, a privileged environment with corners and beaches that deserve to appear in this... 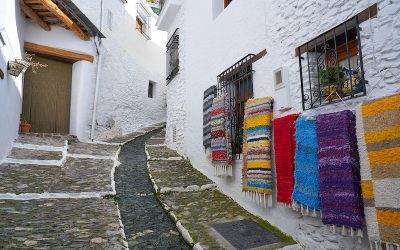 Places to visit in Granada Province (15 best things to do)

As if that weren't enough with everything the city of Granada offers, presided over by the great monument of the Alhambra, the province also contains more than spectacular places. Some are better known and some are less, but all are worth it! Do you want to know what...

It is fantastic to discover how behind the Alhambra and the city of Granada there is a province full of incredible places worth visiting.

And is that if you are going to visit the province of Granada, we already warn you that it is one of the most complete and that it does not lack anything!

Do you want to know what to see and do in the province of Granada?

Known to all and just over 30 km from the capital of Granada, is the southernmost ski resort in Europe, with the highest number of daylight hours and the highest altitude in Spain.

The reference area is the town of Pradollano, from where the ski lifts depart to the ski slopes and where the souvenir shops, equipment rental, restaurants, accommodation, bars … are located.

Sierra Nevada has ski slopes for all levels:

The Sierra Nevada ski resort has hosted numerous winter sports competitions, but is also considered a popular mountain pass for cyclists and a popular hikers’ spot in summer.

If you are not willing to ski or play sports, no problem, you can have a hot coffee on a terrace, start a snowball fight, slide with shovels on the snow slopes or simply observe the landscape and the swaying of skiers and tourists from all over the world.

Granada’s Alpujarra is undoubtedly one of the most charming corners of Europe.

At the foot of the Sierra Nevada is this valley of spectacular landscapes and white Berber-style villages.

La Alpujarra is an ideal place to do gastronomic tourism through its towns or to take nature routes just about 40 minutes by car from the capital.

The towns that make up the Granada Alpujarra are 25:

The most touristic and picturesque being Lanjarón, Capileira, Pampaneira and Trévelez.

In addition, there are many other nearby towns that are located in the Sierra de la Contraviesa, which are also worth visiting.

One more proof that in the province you can enjoy the city, culture, mountains and sea almost on the same day and a magnificent proposal of what to do in the province of Granada.

How many of its towns are familiar to you?

It cannot be denied that the province of Granada has a wonderful variety of settings.

In just 100km you can go from the peak of the mountain to the center of the city or to the Granada coast.

The best known coastal towns are Salobreña, Almuñecar, Motril, Castell de Ferro … and in just about 40 minutes by car on the A-44 motorway you will be soaking in its fresh and crystalline waters.

The Granada coast is also suitable for sports activities such as kayaking, snorkeling or diving.

Some of its most popular beaches and coves are:

Without a doubt one of the best things to do in the province of Granada!

In addition to the Alpujarra, the province has many other municipalities that are well worth visiting.

Take note of which towns in the province of Granada visit!

Within the province of Granada there are curious landscapes that are worth highlighting and above all visiting!

Some of them are within what is called the Granada Geopark, in the north of the province.

It is a spectacular territory of gullies and badlands, the result of the river passage and which houses fossil remains from the Quaternary period.

These unique, wild and arid lands are part of the geological heritage of the European continent and in total it consists of more than 4,000 km that include 47 municipalities belonging to the regions of Guadix, Baza, Huéscar and Montes.

And what can you see in the Granada Geopark?

So go for a tour of the Granada Geopark by 4×4, bicycle, horse or balloon!

And finally, some other places of interest in the province of Granada that are also worth visiting are the Cubillas Swamp, the Vereda de la Estrella in Guejar-Sierra, the Cahorros de Monachil, the route through the Dílar River, the Necropolis of Sierra Martilla, the Mammoth Route …